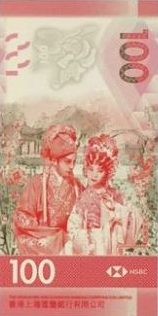 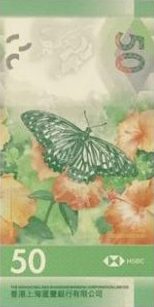 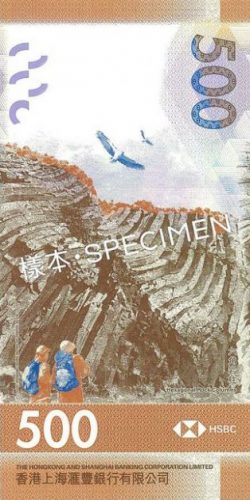 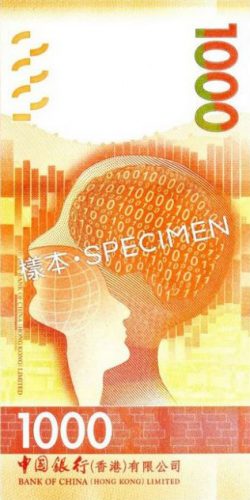 Consistent with the current series, the new series will consist of five denominations, each adopting the same colour scheme. It is the first time that the thematic subjects on the reverse side of the NIBs’ new series banknotes are standardised for each denomination to facilitate easy recognition by the public. The selected thematic subjects represent different aspects of Hong Kong as an international metropolis, featuring its rhythm of life, recreation and entertainment, as well as its rich natural and cultural heritage. The five denominations depict respectively the position of Hong Kong as international financial centre (HK$1,000), the spectacular Hong Kong UNESCO Global Geopark (HK$500), Cantonese opera as our art and cultural legacy (HK$100), butterflies that inhabit Hong Kong (HK$50), and the popular dim sum and tea culture (HK$20). For aesthetic presentation of the subject and easy distinction from previous series, the reverse side of the banknote is in vertical orientation instead of the traditional horizontal layout.

The new banknotes have incorporated advanced security features. Their placement on the banknotes is uniform across all five denominations. The six key features are:

Accessibility features such as braille and tactile lines will continue to be available in the new series for people with visual impairments to differentiate the denominations. As a further attempt to facilitate people with visual impairments, the HKMA has sponsored the Hong Kong Society for the Blind to develop a mobile application that uses a phone’s camera to identify the denomination of Hong Kong banknotes and read it out for the user, but the application is not designed to distinguish counterfeits from genuine banknotes. Note-measuring templates will continue to be made available through voluntary agencies serving the visually impaired community.

Mr Norman Chan, Chief Executive of the HKMA, said, “Similar to other places, we will at appropriate intervals introduce a new series of banknotes for the purpose of adopting the latest banknote printing technology, thus making it difficult for counterfeiters to imitate or replicate our banknotes.” Mr Chan continued, “On top of carrying state-of-the-art security features, the unified thematic subject presented in a vertical layout for each denomination of the banknotes across the three NIBs makes the new series distinctive from the previous one and a good representation of the local culture of Hong Kong. We are thankful to the Chinese Artists Association of Hong Kong, West Kowloon Cultural District Authority, Agriculture, Fisheries and Conservation Department and The Hong Kong Academy for Performing Arts for their valuable advice on the different thematic subjects contributing to a new Hong Kong banknotes series well reflecting its spectrum of life.”

Ms Mary Huen, Chief Executive Officer of Standard Chartered Bank (Hong Kong) Limited, said, “The design of Standard Chartered’s 2018 Hong Kong Banknotes Series pays tribute to the ‘Hong Kong Spirit’. Each banknote reflects a unique attribute of Hong Kong people – Wit and Wisdom, Resilience and Perseverance, Inheritance and Innovation, Better Together, and Sharing and Caring. When the five banknotes are put together, their backgrounds form a silhouette of the Lion Rock, signifying the ‘Hong Kong Spirit’ that connects our people together. As the oldest note-issuing bank in Hong Kong, Standard Chartered is very honoured to have the opportunity to contribute to this city’s development and create this new series of banknotes which is like the name card for all Hong Kong people. We are committed to serving Hong Kong with our brand promise ‘Here for good’.”

Mr Gao Yingxin, Vice Chairman and Chief Executive of Bank of China (Hong Kong) Limited, said, “Firmly rooted in Hong Kong, Bank of China (Hong Kong) has been serving the city for over a century. We are proud of the many achievements and unique charms of this world-class metropolis. Our new series of HKD banknotes depicts the city’s attractions and reflects our close affinity with Hong Kong people while expressing our vision of building an even brighter tomorrow together. Looking forward, Bank of China (Hong Kong) will continue to deepen its local presence to better serve the public, with a view to growing and prospering alongside the city.”

Mr Peter Wong, Deputy Chairman and Chief Executive of The Hongkong and Shanghai Banking Corporation Limited (HSBC), said, “The new series of HSBC banknotes are the first to use watercolour painting in the history of Hong Kong banknotes, giving vitality to imagery that highlights the facets of life in Hong Kong. Hong Kong has always been defined by its people’s shared values of hard work and entrepreneurialism, as well as its sense of family and community. Over the past 153 years, we have stood with Hong Kong people through tremendous change and worked with them to build the city’s prosperity. We hope that people holding our banknotes in their hands will feel the same connection to Hong Kong’s community and heritage as we do at HSBC.”

The HKMA will be launching an extensive promotion campaign to raise public awareness of the new banknotes. Exhibitions will be held across several districts in Hong Kong, allowing the public to become familiarised with the new banknotes prior to their release. An educational mobile application to enhance the public’s understanding of thematic designs and security features will be launched on the first day of the roving exhibition on 25 July 2018 at the Oval Atrium, IFC Mall.