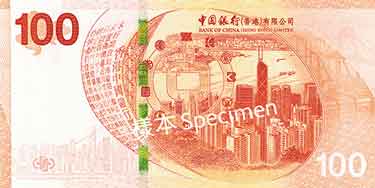 Bank of China will soon issue a 100 Hong Kong dollars new banknote (HK-BoC100.5)  to commemorate its 100th Anniversary in Hong Kong. It was established 24 September 2017, and is today a major commercial bank.

This note is legal tender, but not intended for general circulation. A total of 5 million notes will be issued in three forms of presentation: a special holder with a single note, one with a sheet of three notes, and a sheet of thirty notes packaged in a special tube. A group of 388 notes with special “lucky” numbers have been reserved to be sold at public auction, to benefit charity.