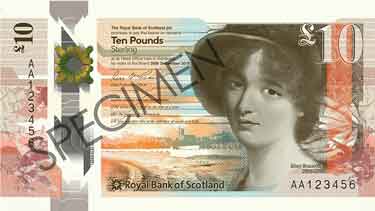 The Royal Bank of Scotland has announced that it will issue its new polymer 10 pounds note (SCO-RB10.3) on October 4. The note honors Mary Sommerville. Its size will be 15% smaller than the current paper ones (SCO-RB10.2).

It also has announced that the new polymer 20 pounds note (SCO-RB20.3) will feature the philantrothropist and entrepreneur Catherine Cranston. Its release is planned for 2020.