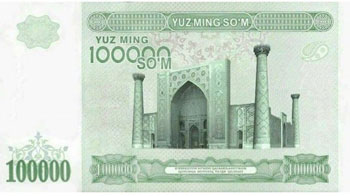 The Central Bank of Uzbekistan denied reports about currency redenomination, and declared that while a new banknote will be issued, its value and date of issue are not yet set.

In April of 2018 “Majid Tahirov, the head of the Central Bank’s Tashkent City Department, gave official information the banknote designs and pictures of 100.000 sums, widely spread over the internet, and said that the banknotes not official.”

“Such information can only be considered official after the publication of the official website of the Central Bank.”