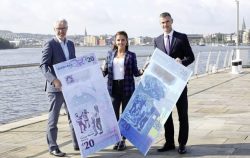 The polymer note, which is due to enter circulation next year, includes an image of street entertainers and their audience.

Other images include brickwork and tiles used in many of the north’s public buildings, an outline of Lough Neagh and a picture of its famous eels.

As part of the note’s security features, skeletons and a Leisler’s bat – the largest type of bat in Ireland – can be seen under UV light.

Derry Girls star Jamie-Lee O’Donnell, who plays Michelle in the hit Channel 4 series, helped launch the design of the new note at the bank’s Culmore Road branch in Derry yesterday.

Terry Robb, head of personal banking in Northern Ireland, said the bank had received positive feedback on the design.

“Bank notes continue to be an important part of the way that people interact with us, and we’re proud to introduce these bold new designs which celebrate our cities and commitment to enjoying ourselves,” he said.

The bank also reminded customers to use or exchange their paper £5 and £10 notes before they are withdrawn completely from circulation.

Ulster Bank has been phasing out its paper notes over this year.